Arthur Machen was the pen-name of Arthur Llewellyn Jones, a Welsh author and mystic of the 1890s and early 20th century. He is best known for his influential supernatural, fantasy, and horror fiction. His novella, The Great God Pan (1890 -1894) has garnered a reputation as a classic of horror, Stephen King described it as "Maybe the best [horror story] in the English language." He is also well known for "The Bowmen", a short story that was widely read as fact, creating the legend of the Angels of Mons.

Machen was born Arthur Llewelyn Jones in Caerleon, Monmouthshire and was descended from a long line of clergymen. At age of eleven he boarded at Hereford Cathedral School, where he received an excellent classical education. Family poverty ruled out attendance at university, and Machen was sent to London, where he failed exams to attend medical school. Machen, however, showed literary promise and returned to London where he lived in relative poverty attempting to work as a journalist, as a publisher's clerk, and as a children's tutor while writing in the evening and going on long rambling walks across London. 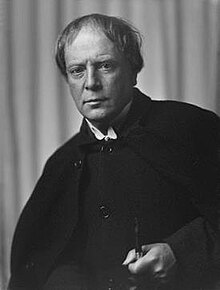 In 1887 Machen married Amelia (Amy) Hogg, an unconventional music teacher with a passion for the theatre. She died in 1899 of cancer after a long period of illness which had a devastating effect on Machen. His recovery was helped by a sudden change of career. In 1901 he became an actor and a member of Frank Benson's company of travelling players, a profession which took him round the country.

This led in 1903 to a second marriage, to Dorothie Purefoy Hudleston. Machen accepted a full-time journalist's job at Alfred Harmsworth's Evening News in 1910. In February 1912 his son Hilary was born, followed by a daughter Janet in 1917. The coming of war in 1914 saw Machen return to public prominence for the first time in twenty years due to the publication of "The Bowmen" and the subsequent publicity surrounding the "Angels of Mons" episode. He is recorded as staying in Whitby in November 1916.