Vice Admiral Sir Willam Clarkson who co-founded the Royal Australian Navy was born in Whitby in 1859. His father had a draper's shop on Grape Lane before the family moved to St Hilda's Terrace where William was born. He attended private school and went on to be articled to the shipbuilding firm of R & W Hawthorn in Newcastle. He later worked there as a marine engineer. He moved to Australia in 1884 where he had a distinguished career in the Navy. 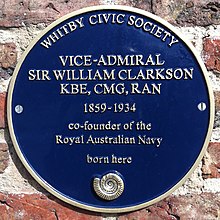 In May 1884 Clarkson joined the South Australian Naval Service as an Engineer Lieutenant, coming to the colony in HMCS Protector. It was during this time that he served under Captain William Creswell, later Vice Admiral and Commander of the Commonwealth Naval Forces, who shared his interest of creating a united Australian Navy.

On 24 August 1887 he married Louisa Clarissa Hawker at Christ Church, Adelaide. Clarkson was promoted to Engineer Captain in July 1910 and, upon the establishment of the Royal Australian Navy in 1911, was appointed Third Naval Member of the Australian Naval Board, a post he held until his retirement in 1923. He was responsible for the construction and engineering of ships, for ships' repairs, and for control of naval dockyards and bases. In 1913 he was appointed CMG and on the outbreak of World War I became controller of shipping for Australia as well as director of transports. He was promoted to Engineer Rear Admiral in 1916 and appointed KBE in 1918. That year he was appointed chairman and controller of the Interstate Central Committee to operate coastal shipping requisitioned for Imperial service.

Clarkson died of heart disease at his home in Darling Point, Sydney, 21 January 1934 and afer a funeral with full military honours, his ashes were transported to Whitby where they are interred in the family memorial, St Mary's Church.